It was 2009 and in the few years since the City of Miami and the City of Miami beach had passed a sex offender residency restriction (SORR) hundreds of people required to register found themselves displaced to a parcel of land under the Julia Tuttle Causeway, essentially a bridge that spanned Miami and Miami Beach. The tent city was so large and unsightly that it began to garner international media attention. The Julia Tuttle was one of two access points to Miami Beach, one of the worlds largest tourist destinations, from the airport. It wasn’t a good look for the Cities. The lobbyist who spearheaded the ordinances that caused the problem and for which “Bookville” was named, had a solution. He very ceremoniously had the area fenced off and evicted everyone.

Shortly after, a new encampment emerged in another of the limited pockets of compliant land in the County. The area along 79th Street and NE 10th Avenue in the Shorecrest neighborhood quickly swelled to more than 150 people with nowhere to go but the sidewalk. Just like the Julia Tuttle Causeway, the street corner, which was the gateway to the John F. Kennedy Causeway that separated Miami from North Bay Villiage, became that area’s problem. So to fix it, then Commissioner Marc Sarnoff stuck a couple spring toys into a vacant lot and christened it a “pocket park“. 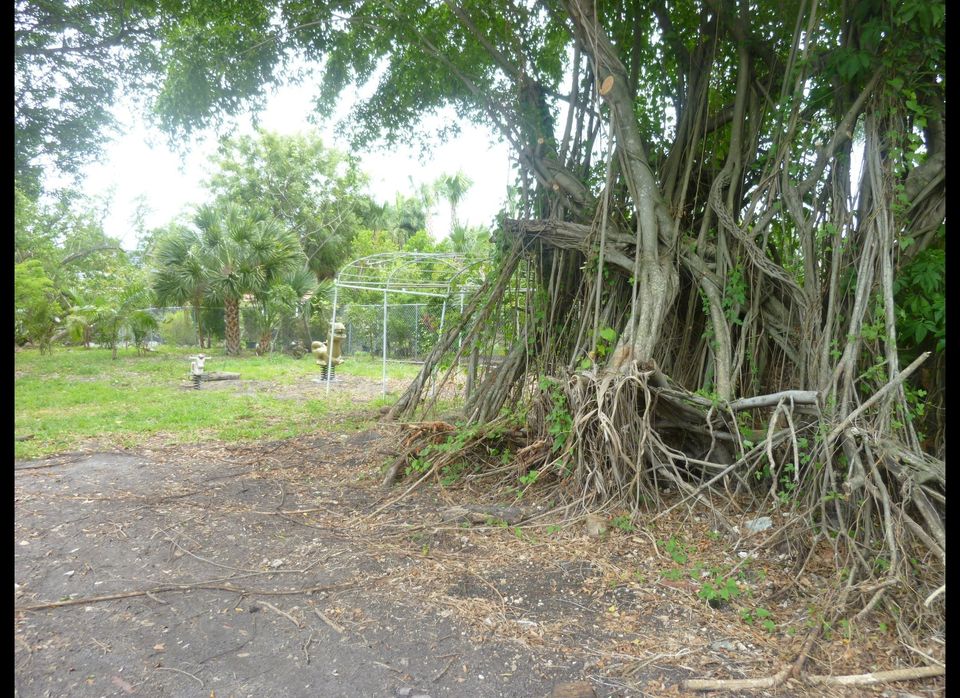 The decrepit “pocket park” did nothing for the children in Shorecrest other than expose them to tetanus from the rusted spring toys and miscellaneous litter, but what it accomplished was the displacement of the cluster of registrants who scrambled to simply stay in an area that was compliant with the SORR. Now that there was a park, another exclusion zone was created.

If you click on the link two paragraphs above and read the Huffington Post article, you should notice three things. First, it was written 10 years ago. Second, Ron Book (the lobbyist who created this issue) was ironically also the person quoted as in charge of finding the solution to it. The third thing you should notice is his specific comments: “There are places that meet the 2,500-foot law, Book said, but many freed offenders may not be aware of their locations. He told HuffPost the Trust is willing to help lead them in the right direction.”

Great! Housing options!!! So, as if leading the slaves from Egypt in biblical times, this modern-day Moses was going to show the people all the available residences in Miami-Dade County where they could live in compliance with the SORR (which was incidentally named after his daughter). Wonderful! There was a savior willing to “help lead them in the right direction.”

Well it’s been 10 years, Mr Book… The homeless registrant crisis is worse than ever! There are HUNDREDS of homeless registrants in South Florida still wandering in the proverbial desert waiting for you to deliver the solution to this problem you created.

Now people have to understand Mr. Book’s hatred of registrants. His daughter was the victim of sexual abuse. If his daughter had been the victim of a school shooter or drunk driver, I’m sure we would have much different gun or DUI laws today. But with that in mind, we’re not questioning the justification for his anger. We are merely asking whether he was ever the most appropriate person for this job? If during a County meeting one of the commissioners asked for a volunteer to spearhead the racial sensitivity program and David Duke stood up and said, “I’ll volunteer!” someone should have recognized that’s probably not the best idea. Same situation here.

We trust nobody reading this post actually believes that Ron Book will deliver a solution, that Ron Book should be the one charged with finding that solution, or that Ron Book ever cared whether a solution would ever be found. Nobody is that gullible. But it’s been more than 16 years since SORRs were enacted and people are dying because of them.

And it’s not just in South Florida. Like dominoes, no municipality wanted to become the dumping ground for this public relations nightmare, so as soon as a city passed an ordinance, so did the neighboring city, and the one next to that, and the one next to that one, and so on. And one city’s ordinance became the template for the next city’s. And one city’s strategy for displacing the cluster became the next.

It’s been 10 years since Marc Sarnoff’s “pocket park” but even now, Joliet, Illinois “Mayor Bob O’Dekirk announced Tuesday that the city will create a park within 500 feet of an apartment building where six sex offenders live in an effort to drive them out.” It’s that brazen! It’s literally the first sentence of this article and “… the first action we’re going to take,” O’Dekirk said.

Back in the days, SORRs were passed under the premise that it was done to protect the children. Today, nobody buys that anymore. A law that prevents people from sleeping within 2500 feet of a school between 10PM and 6AM is asinine. KIDS ARE NOT IN SCHOOL BETWEEN 10PM and 6AM!!! You have a better chance finding a kid within 2500 feet of any registrant at 10PM than on a school campus.

Today, politicians are much more shameless about their intentions. They openly announce they are passing a SORR because the neighboring municipality passed one and they are putting in a park to banish registrants.

Back in the days, SORRs were able to withstand constitutional scrutiny because the legislative intent was argued to be public safety. I wonder how such a challenge would fare when the Mayor’s stated intent is to drive out a class of people? Perhaps some food for thought for Illinois Voices?