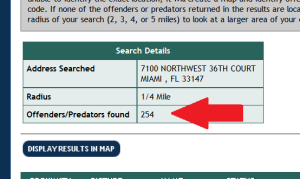 The shame of Miami-Dade has reached a new level. The encampment of homeless sex offenders living alongside the railroad tracks on the street corner in a warehouse district in Miami-Dade county has reached two hundred fifty people.

That’s 250 human beings who were once convicted of a sexual offense, no matter how serious or benign, many of which have served their sentence and are no longer on probation, are forced to live without shelter, toilets, or even potable water, all because of the Miami-Dade Sex Offender Residency Restriction (The Lauren Book Act), that prevents them from living within 2500 feet of a school.

For a densely populated county, such as Miami-Dade (the most populous county in Florida), that effectively banishes them from most of the County other than this patch of grass sandwiched between a warehouse and active railroad tracks.

A lawsuit, brought by the ACLU and on behalf of the Florida Action Committee, is pending in the Eleventh Circuit Court of Appeals (Case No. 15-14336), but relief, if it eventually does come, may not come soon enough! These individuals are dangerously close to the epicenter of the expanding area where Zika virus is being transmitted. Add to that the fact that they are left out in the elements and in close confinement,  the threat to their health is imminent.

If you are reading this, we implore you to contact your local media and politicians, no matter in which County, State or even Country you are located, to help bring attention to this crisis.

Get reminded to register on your months via SMS text messages. Just text "START" to 727-233-4785 to begin -OR- click HERE for more details. This flyer can be printed and shared with others freely.