An opinion piece in response to a recent article in the Miami Herald was published today.

The text of the response and an image of the article as it appeared are below.

Your December 31, 2018 article, “Report: Number of sex offenders living in Florida is growing.” correctly points out that the Office of Program Policy Analysis and Government Accountability (OPPAGA) does not include any explanation for the rise in the number of sex offenders in our State. However, the reason is obvious. Florida is one of only a small handful of states that requires people to register for the duration of their life.

When you combine new sex offenders being continuously added to the registry with zero attrition, it’s no wonder the numbers have grown (and will continue to grow) at such a fast pace.

It is time Florida followed in the footsteps of states such as California and Missouri, who recently enacted a tiered registry. We need to stop wasting millions of taxpayer dollars on something that research has consistently demonstrated is ineffective. If not, the registry will only become more bloated and untenable than it already is. 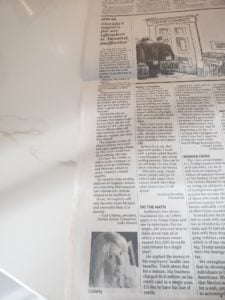