Making headlines in Jacksonville is the news that the Sheriff’s department will not enforce it’s “sign ordinance” this year (and until the outcome of a lawsuit pending challenging the signs or some settlement between the parties).

Jacksonville has an ordinance which stated:

Any person designated a Sexual Offender or Sexual Predator shall:

(ii) From 6:00 a.m. to 11:59 p.m., on October 31 (or any other day on which Halloween is celebrated) post a sign at his or her residence, including a vessel, or vehicle, stating, “No candy or treats here.” Such signs shall be in letters at least two inches high and shall be legible on the property leased, rented, owned or occupied by the Sexual Offender or Sexual Predator, and clearly visible from the street, waterway, or any property that is open to public access. The signs may be removed after 11:59 p.m. on October 31, or the day on which Halloween is celebrated.

(iii) Except for lighting provided on a year-round basis by the owner or manager of a multi-family residential unit for the purpose of security or walkway or hallway illumination, leave all outside residential lighting off during the evening hours after 5:00 p.m. on October 31 (or any other day on which Halloween is celebrated).

Basically, persons required to register (regardless if their offense had anything to do with enticing children or even children at all) had to post a sign “clearly visible from the street” that said “No Candy or Treats Here”. Persons required to register were also restricted from placing or displaying any holiday decorations visible outside the residence. No Christmas lights, no Tree you can see through a window, no wreath on the door (regardless of whether your own children wanted a tree or to light a menorah).

The signs might well have said, “I’m a sex offender, egg my house”, but they could have said anything – the point being, government cannot force an individual to display a message they don’t agree with. After a similar challenge was successful in Butts County, Georgia – which was appealed to the 11th Circuit and was upheld, two registrants in Jacksonville decided they’ve had enough. No posting signs and no telling me I can’t decorate my own home for holidays. Through Florida Justice Institute they sued and once the City Attorney advised the City that the case would likely lose and cost taxpayers a bunch of money, they voluntarily agreed to not enforce the ordinance until the case is resolved or they amend the ordinance.

It’s a win, no matter how you take it! This year families in Jacksonville will be able to celebrate holidays just like every other family!

Yesterday we did a call to action, asking members to write in to the news outlets that were running this story, and asking them to share comments to offset the mounds of ignorant hateful comments that inevitably come in the wake of such news. We appreciate those who have written in. Between now and October 31st we will need to be in defense mode. We will need to counteract the scare stories that come out every year with FACTS.

Here are the facts:

There is ZERO evidence that sex crimes occur at higher rates on or around Halloween than any other day of the year. In one of the broadest studies  that examined nearly sixty-eight thousand cases of child sexual abuse, researchers found no increased risk on Halloween and Halloween ordinances, such as the one in Jacksonville had no effect on that risk.

Despite the evidence that children are at no greater risk of sexual assault on Halloween, lots of law enforcement resources certainly go into checking on registrants and issuing warnings to the public. Wouldn’t it be better to apply those resources to a risk that is demonstrably and significantly increased during Halloween?

According to data from the National Safety Council (NSC), children are more than twice as likely to be hit by a car and killed on Halloween, compared to any other day of the year and 44% of national fatal crashes during Halloween involved an impaired driver.  So while there is absolutely no evidence that Halloween has a demonstrable effect on the risk of sexual assault, there is significant evidence that drunk drivers are killing more children on Halloween (twice as many, in fact).

It would make more sense to require anyone who has ever had a DUI to be forced to put a magnetic sign on their vehicle, any vehicle belonging to a member of their household, any vehicle leased or rented by anyone in their household or any vehicle belonging to a person or persons residing at their residence for 5 or more consecutive days. The sign would have to stay on the vehicle from October 30 – November 1 and be visible from three car lengths away.  It doesn’t matter if it shames the other drivers in the household or provokes people to slash their tires or run them off the road. This is done for the children. 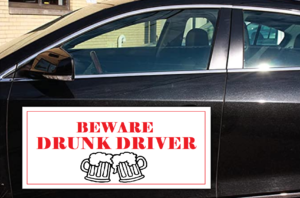 I imagine such a scheme wouldn’t take very well with the people of Jacksonville. Neither would an ordinance prohibiting anyone with a DUI from, “participating in any practice or event, including, but not limited to, any event related to a nationally or locally recognized holiday or seasonal event, if alcohol will be served at such practice or event.” It doesn’t matter if the person has been sober for decades, it doesn’t matter if the person won’t personally be drinking. If there’s an event and an alcoholic beverage will be there, it’s either no alcohol for anyone or the guest with the DUI can’t come.  It might sound extremely harsh and draconian, but that’s just alcohol you have to give up. In the case of the current Jacksonville ordinance it’s a person you have to give up. It’s either the minor guest or the registrant guest.

Neither of these ideas for managing DUI offenders on the holidays would ever fly, even though the number of children killed by DUI offenders is much higher than registrants, the recidivism rates of DUI offenders is 29.5% even though less than 1% of Drunk Drivers are caught (Federal Bureau of Investigation, “Crime in the United States: 2014” https://www.fbi.gov/about-us/cjis/ucr/crime-in-the-u.s/2014/crime-in-the-u.s.-2014/tables/table-29 Incidence data: Centers for Disease Control and Prevention. “Alcohol-Impaired Driving…), but if the City of Jacksonville is going to want to pass a sign ordinance to help keep children safe, shouldn’t they pass one that will actually do something?